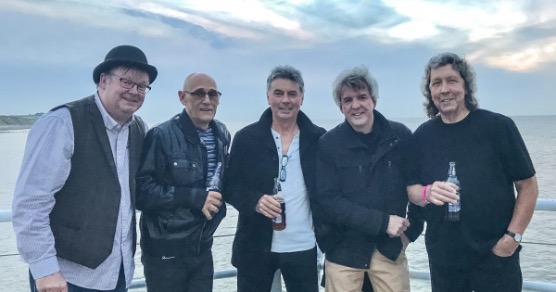 Buy your ticket for Smihth & Brewer plus Palmerston at the David Evans Court Theatre Tring.

Ben Smith and Jimmy Brewer met at an event organised by Joan Armatrading for the acts she had chosen to support her on her 2015 tour. Although they originally planned to just write together, they soon realised that their playing styles and voices complemented each other and they started playing together after their inaugural gig supporting Joan Armatrading in front of a thousand-strong crowd.

Since then, they have played together all over the UK, notably as the support act to 10cc and Ralph McTell on their 2018 U.K tours, at Fairport’s Cropredy Convention 2018, the 2018 Cambridge Folk Festival and the UK Americana Music Association Showcase in 2017 and 2019, as well as at AmericanaFest in Nashville in 2017. They also contributed backing vocals to Ralph McTell’s new album, which was produced by Tony Visconti.

They have recently finished work on their debut album, Another Shade Of, due for release in autumn 2019. It was recorded at Coltsfoot, a friend’s barn which they converted into a studio for a week. This allowed them to record together live both as an acoustic duo and a full band. The tracks were mixed by Ben and Jimmy and mastered by David Mitson (noted for his work with Michael Jackson, Willie Nelson and more).

Palmerston`s reputation has rapidly grown over the last few years and has seen the band sharing stages with the likes of, Ralph McTell, Eve Selis, The Moulettes, Richard Digance, and country guitar legend, Albert Lee, who said of them….

“The gentlemen of Palmerston guarantee you an exciting evening of music, the music is fresh, invigorating, all theirs and a must see-and-hear”

Whilst performing their music described as British Americana at festivals & theatres around the country, they have also played many live Radio broadcasts, and recorded three albums and two EP`s. This, alongside the recording of a DVD capturing their “Birmingham Town Hall” appearance whilst on tour with Albert Lee.

‘The festival faithful immediately warmed to Palmerston who opened the Friday night for seasoned artists Richard Digance and Home Service.
Backstage they were a joy to deal with and efficient and professional in their approach to the Cromer’s usual tight turn round technically for the evening concerts’

Scott Butler – Folk on the Pier

Original songs written by Alan Rondeau are performed by Palmerston, and make you smile in a way that only Beer or Sunshine can!