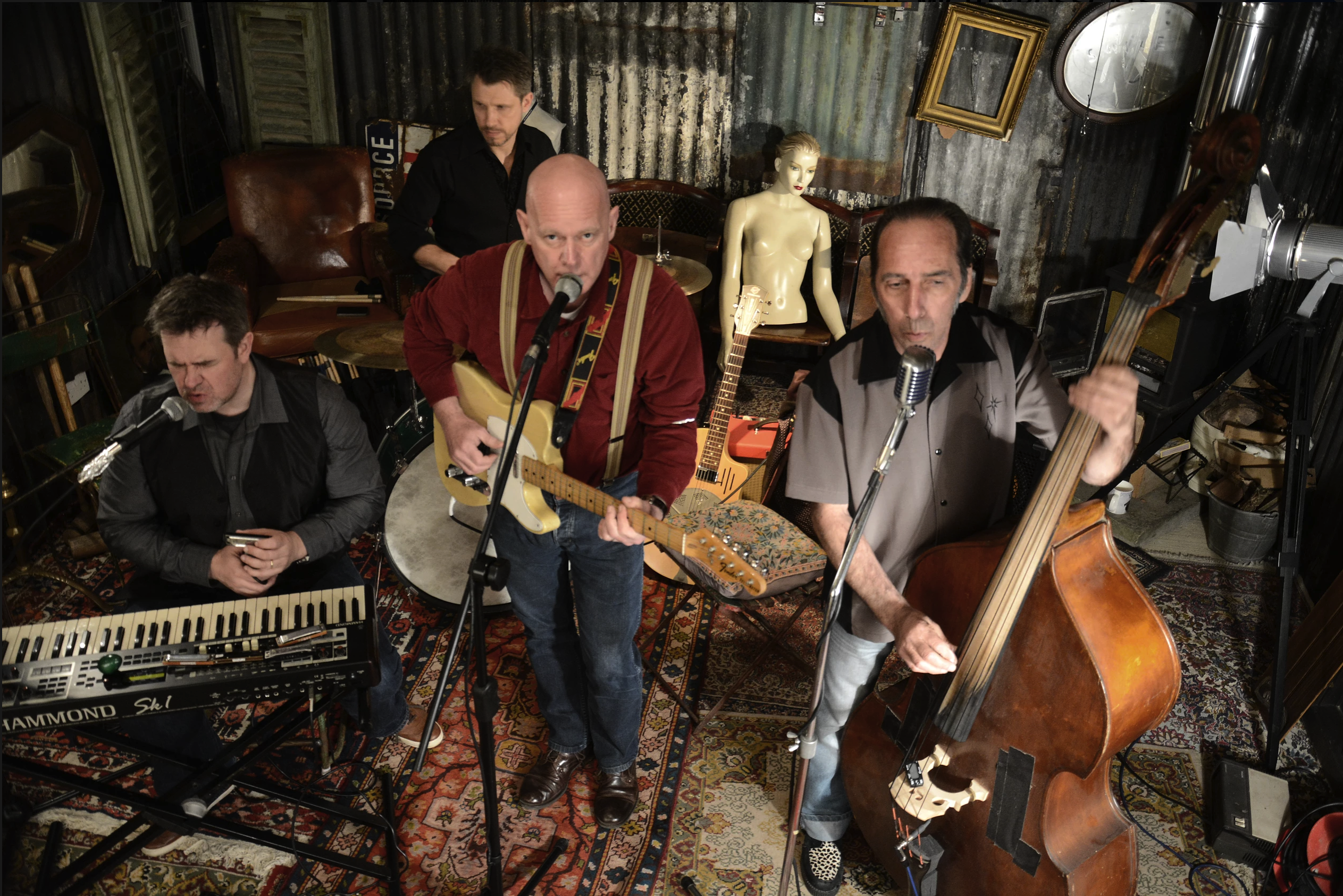 Formed around 2007/8 and morphed from the Boss Cats, a trio playing hard edged Texas Blues, into the sophisticated sound of the Mighty Boss cats

Richard Townend, for the uninitiated, was a professional musician graduating from Leeds College of Music in 1986 where he studied guitar and composition. After graduating, he toured throughout the UK with the likes of Ronnie Corbett, Charlie Drake, Les Denis, Dana, The Platters and Tony Christie. He became, perhaps unsurprisingly disillusioned with the professional music scene until, a few years later, he was in the audience of a blues jam session in Essex. That inspired him to get back into playing so he formed a band called the Boss Cats, and gigged relentlessly with a blues/rock set. I get the impression that this was too limiting for the kind of musical expression Richard needed to display and so the Mighty Boss Cats came into existence and he began to write his own unique blend of music reflecting his diverse influences. He was, and remains, extremely prolific and has, by reckoning, released eleven albums including this most recent release, God Bless America.

It may seem strange for a British artist to write songs so aware of the attitudes and atmosphere in the run-up to the Trump victory but, as Richard says, “During a US road trip taking in Dallas, Graceland, Stax, and Sun Records and the site of Dr Martin Luther King Jr’s, assassination, the road trip provided a unique view of modern American cultural history. It was fresh in my mind on Election Night, and as the TV announced Trump had won, three supporters at the bar whooped with gusto. Three JD’s were ordered. Looking at the TV, and holding his shot high, one toasted, “God Bless America”…and so the first new song for the album was written”. This puts the whole album into perspective, for it is steeped in the Americana tones of blues, country with hints of bluegrass and gospel. Inevitably comparisons spring to mind… and for me, I get a hit of JJ Cale, Mark Knopfler and Chris Rea.

Townend and the band of consummate musicians known as the Mighty Bosscats have put together a superb set of finely honed songs, which should appeal to many outside of the aforementioned genres. Be aware, however, if you are expecting guitar hero, rocking blues, then you will not find them here. What you will find are 14 clever songs, crafted and produced faultlessly with the added benefit of thought-provoking, clever lyrics. The band explores a sound landscape enriched by acoustic, electric, dobro and pedal steel guitars always backed by perfectly aligned bass, keys and drums.

You can watch The Mighty Boss Cats below:

What The Papers say

“This whole album is drenched in class. Every band member contributes so well and they play with an enviable empath It will reward you with repeated listens too. Fans of Knopfler style laid-back, rootsy rock will love it.”
Bluesnoodles.com

“Melancholic, relaxed and enthralling: Richard Townend is a fascinating songwriter in the world of Blues. With The MightyBosscats he has a band on the side that make his songs prime examples of contemporary blues ……WASSER-PRAWDA.DE

“With ‘God Bless America’ it seems evident that they have moved ahead, running onto a new path of irresistible modern, top notch music, always with a blues edge at heart but aided by a keen eye towards the Americana future. This is a true delight, an album to savour.”

With its strong hints at Americana-cum-blues and rocking drive, this is easily one of the best of British bands out there, and Gold Fever an album to enjoy.

“The message is in the lyrics, get this, get goldfever. I feel this is Richards best collection to date, in his own imitable style and likely to be seen as an excellent opportunity to cross over from the secular blues world to more mainstream”

This is a simply lovely album from a UK outfit with a blues-cum-Americana outlook, feel and beauty.

Townend is a mighty clever lyricist, a guy who can work a theme and run a rippling roll of fretwork and melody to match the thinking. The result is a genuinely individual and engaging musical take and outlook.”

“Richard Townend is perhaps one of the most prolific songwriters in the British blues scene. Since 2011 he has released 9 albums as a soloist and with The Mighty Bosscats. The fact that he can, even at this pace, still write outstanding songs, was proven once again with “Boiling Pot”.

“With its’ high production values, standard of musicianship and impressive lack of filler material Boiling Pot has the makings of something rather special”

“The songs evoke imagery, often thought provoking, as only Richard can do “

………..including the exceptional and exceptionally
atmospheric ‘Hang An Innocent Man’, prove Townend is a great writer as well as musician”